The Notre-Dame fire on April 15 was a singular disaster. But Paris has already lost countless other monuments. This map traces one of the darkest episodes in the city’s history.

During the Commune of 1871, dozens of historic buildings were set on fire. Some have been restored to their former glory, others have been replaced by buildings of a radically different design, and some are gone forever.

The Paris Commune was a brief but bloody insurrection of the Parisian proletariat. He would later exert an enormous influence on communist thinkers like Marx and revolutionaries like Lenin.

On the left, the Vendôme column: “Memorial to our ancient glories, in 1810 this column replaced the ruins of the pedestal of the Louis XIV statue. It was destroyed on May 15, 1871.

The context of the uprising was the Franco-Prussian war, which at the end of 1870 was going terribly badly for France: Napoleon III had capitulated to the Prussians, causing the collapse of the Second Empire. The fledgling Third Republic struggled to keep the fight going.

The Prussians advanced to Paris and besieged it for four months. The French government had abandoned the capital, fleeing first to Tours, then further south to Bordeaux. During the freezing winter of 1870-’71, starving Parisians ate the animals in the zoo, then resorted to rat meals.

The main defense of Paris was the National Guard, largely drawn from the politically radicalized working classes. Calls for the establishment of a “socialist republic” in the Paris Commune multiply.

After the capitulation of France in January 1871, the Commune established a Central Committee which refused to accept the authority of the French government. Revolutionary troops seize the main government buildings and hoist the red flag on the Town Hall.

On the left, Ministry of Finance: “Built in 1811 on the site of the gardens of the Feuillants convent, this building has now completely collapsed. It was one of the first to be burnt down on May 23, 1871.

For a few months, the Paris Commune governed itself, decreeing a multitude of socialist, secular and anti-imperialist measures, until the army restored the authority of the government during the Bloody week (Bloody Week), which began on May 21, 1871.

One of the decisions of the Commune was to demolish the Vendôme column as a “monument of barbarism” and “symbol of brute force and false pride”. The original proposal was from Gustave Courbet, the painter.

On the left, the Palais des Tuileries: “This is one of the biggest losses for Paris. The main building is nothing more than a heap of ruins. Burned on May 23, 1871.

The column was destroyed on May 16. After a failed first attempt, he was knocked down at 5:30 p.m. The column shattered into three pieces, the pedestal was draped in red flags, and the bronze was melted into coins.

It took some time for France’s “government in exile” to muster enough troops to reclaim the capital. A final bloody assault by the French army puts an end to the Commune.

On the left, the Royal Palace: “Residence of Prince Napoleon, this building is totally in ruins. Anne of Austria lived there in 1645, then Cardinal Richelieu, then Regent Philippe d’Orléans.

Bloody Week began on May 21, when the army entered the city walls unchallenged. In the absence of organized resistance, he then took over the city quarter by quarter.

In response to the army’s advance into the city on May 22, up to 900 barricades were hastily erected by the Communards. That afternoon, the first fierce fighting began, with artillery duels between the two sides. The National Guard started executing army prisoners, and the other side returned the favor.

On the left, the Palais de Justice: “The old part of the palace has suffered little, but the new part, an architectural masterpiece, is in ruins. The Sainte Chapelle was spared but the beautiful paintings of Lhemann and Robert Fleury were consumed by the flames.

On May 23, the army reconquered the Butte Montmartre, where the uprising had started. The prisoners were executed en masse. In revenge, the National Guards began to burn down public buildings.

In the early hours of May 24, the Town Hall, until then seat of the Municipality, was evacuated and set on fire. That day, uncoordinated fighting resumed under thick blankets of smoke.

On the left, concierge: “Side overlooking the Quai des Orfèvres. It was from this building that the orders for so many massacres were given. In many previous reigns, it was also in this court that so many innocent people were executed.

Other buildings burned down

Other buildings were set on fire: the Palais de Justice (destroyed except for the Sainte-Chapelle), the Police Prefecture, the Châtelet and Porte Saint-Martin theaters, and the Saint-Eustache church.

The fires that started at Notre-Dame were put out without causing too much damage. At the end of the 25th, the Municipality only controlled a third of the city.

On the 26th, the army retook the Place de la Bastille and the Buttes Chaumont the next day.

One of the last redoubts of the Commune was the Père Lachaise cemetery. The last 150 guards surrendered and were gunned down on what is now known as the Communards’ Wall.

“The revolutionary government of the future”

The last resistance was wiped out on the 28th. The army counted 877 victims and the number of Communards killed was much higher, but the exact number remains uncertain – estimates vary from 6,000 to 20,000 killed.

For Marx, the Commune was the “prototype of a revolutionary government of the future”. Communist theorist Friedrich Engels was the first to call the Commune a “dictatorship of the proletariat,” a phrase later taken up by Lenin and applied to the Soviet Union.

Lenin dancing in the snow

The Paris Commune inspired similar workers’ uprisings; first in other French cities, and also later, as far as Moscow (1905) and Shanghai (1927 and 1967). Lenin danced in the snow in Moscow when his government was two months old – that meant he had already survived the Paris Commune. A red banner of the Commune brought to Moscow by the French Communists in 1924 still adorns his mausoleum.

For decades, the ruins of the Commune have remained visible in downtown Paris. In fact, they have become popular tourist attractions, just like the ruins of ancient Rome or Greece.

Oddly enough, the propaganda value of destruction quickly reversed the polarity. The Communards had burned down large old buildings as a last act of furious resistance against the resurgent bourgeois regime. 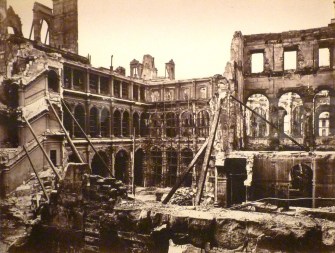 The excesses of radicalism

Rather than a rebuke from imperialism and capitalism, the ruins have come to be seen as a warning against the excesses of radicalism.

These 22 vignettes of buildings destroyed during the Bloody Week frame a large map of Paris which gives the impression that the Commune had never existed: the Tuileries Palace is still attached to the Louvre, and the Grenier d’Abondance stands on the riverside, garnished with dishes that will soon end up on Parisian tables. 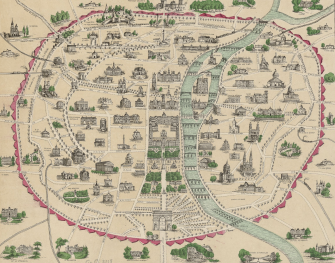 This map is not only a critique of the destruction carried out by the Communards, it is also a roadmap for Paris in the middle of the 19th century. And despite the fact that a number of buildings have been lost in history, it is still a fairly accurate guide to the architectural heritage of the city today.

Image found here to National Library of France (also on the map, by the way).

Do you have a strange card? Let me know at [email protected].

A novel explores power, sex, consent and identity in a French commune

ARCADIABy Emmanuelle Bayamack-TamTranslated by Ruth Diver The difference between a sect and the society in which its members seek refuge can be seen as a matter of scale. Successful cults make exclusive and very particular a recognizable pattern involving rules, systems, norms and, perhaps most importantly, a very confident leader. Although they herald ultimate freedom, […]

Rural cafes in France have given a helping hand to reopen

A village cafe restoration project is slowly restarting business after Covid restrictions put many of its plans on hold. the 1,000 coffees program, in collaboration with city councils and other local authorities, had opened about 20 cafes before the pandemic. A few of them remained open during closings and curfews, offering “multiple services” such as […]